Shad have been the quiet underdogs of the Columbia River for many years, but with ever increasing numbers migrating during the spawn, the largest member of the herring family is quickly becoming a summer time fishing favorite.  Shad are not native to the Columbia River or anywhere on the west coast, but were transported from the east coast in the 1871 to California via train in only four 8 gallon milk cans. The original 12,000 shad populated much of the San Francisco waterways and even made their way up the Columbia River.  In the late 1800’s Washington also decided to import their own stock and created the beginning of an excellent fishery.

At 17 to 19 inches and 3-5 pounds, Shad are hard fighting fish on light tackle with acrobatic jumps and head shakes.  In some years over 3 million Shad have passed over the Bonneville Dam so during the main migrations in June and July so it is not uncommon to have thousands of fish swimming under the boat.  However, knowing where Shad are congregating is where Fishers Catch Outfitters years of experience comes into play.

During the Shad migration is also when the elusive oversized Sturgeon begin to gorge.  Catching fresh Shad and then going for lunker Sturgeon can often produce fights with Sturgeon over 11 feet in length.  The two day fishing packages allow for targeting both species, but fishing dates quickly book up so be sure to plan ahead.

The main migration of Shad occurs during June and July.

A Washington Fishing license is required to fish for Shad. 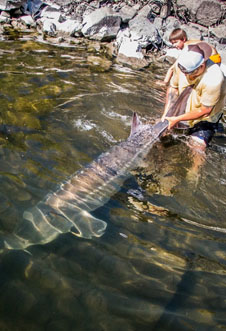 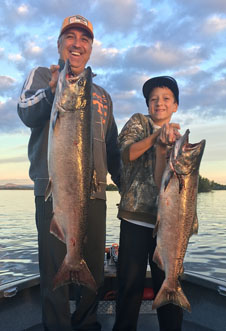 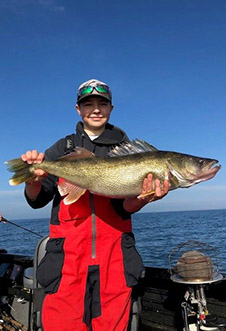 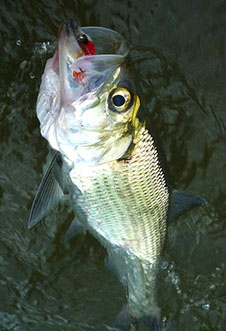